Pride Even Up Series Against the Rebellion, 3-1 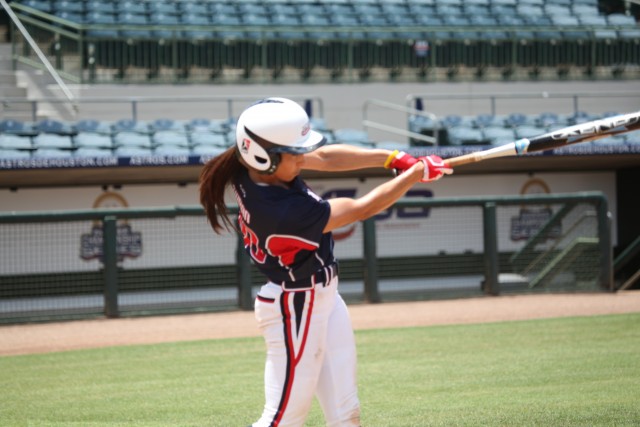 The USSSA Pride take the win on Sunday night to even the series against the Rebellion.

Kissimmee, FL– July 19th- The USSSA Pride tied up the home series with the PA Rebellion at one game apiece with a 3-1 victory Sunday night at Champion Stadium.

The Pride struck first, scoring three runs in the third inning. USSSA’s Madison Shipman reached to lead off the inning after being hit by a pitch and GiOnna Disalvatore doubled to left center, giving the Pride two runners in scoring position. Third baseman Andrea Duran followed with her third home run of the season, propelling the Pride into a 3-0 lead.

The Rebellion got a run back in the fourth inning when Alexa Peterson doubled home Haruna Sakamoto. That would be all the scoring for the night as the pitchers for both sides posted zeroes on the scoreboard the rest of the way.

Chelsea Thomas (W, 5-2) started for the Pride in the circle and picked up the victory after surrendering just one run on three hits in her five innings. Jordan Taylor (S, 9) entered the game in the sixth inning and tossed the final six outs of the game in scoreless fashion to pick up her ninth save of the season.

The bottom three hitters in the Pride’s order had a strong night at the plate going 5-7 with a double, home run, and a hit by a pitch.

The Pride and Rebellion will square off again tomorrow, July 20, with the first scheduled for 7:05.