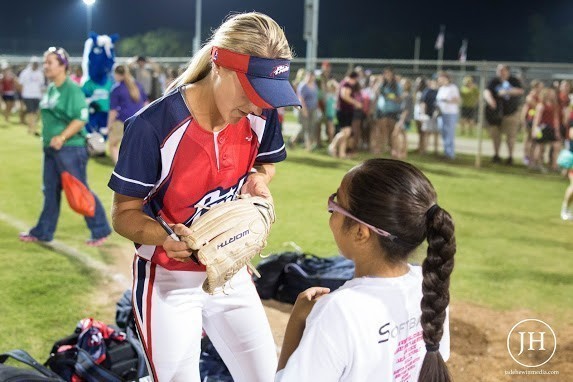 Lauren Chamberlain and the USSSA Pride will face the Pennsylvania Rebellion July 3rd and 4th in Maumee, OH. Photo by Jade Hewitt

Kissimmee, FL — July 1, 2015- The USSSA Florida Pride will play a two game series against the Pennsylvania Rebellion on Friday, July 3rd and Saturday, July 4th at the Lucas County Recreation Center in Maumee, OH. First pitch is set for 7:05 pm EST each night.  This series marks another home stand for the Pride this season.

In addition to the Pride games, the Lucas County Recreation Center will also host the free-entry, Patriots Pride Tournament Friday, July 3rd through Sunday, July 5th for ages 8 and under and 18 and under.

The Pride’s roster features some of the top softball talent in the world including Andrea Duran, Kelly Kretschman, Cat Osterman, and Natasha Watley.  Additionally, the roster features last year’s NPF Rookie of the Year and former University of Tennessee standout Madison Shipman and the two WCWS Players of the Year in Hannah Rogers and Keilani Ricketts. Rookies, and former University of Oklahoma powerhouses Shelby Pendley and Lauren Chamberlain also join the 2015 Pride roster.

The Pride’s 2015 NPF season kicked off June 6th in McKinney, TX where they visited the newest NPF team, the Dallas Charge. Since then, they’ve increased their winning record to 10-4.

You can purchase tickets to the series through the Recreation Center in Maumee, OH.  Please call 419-794-7150 for more information regarding the Patriots Pride Tournament as well as the USSSA Pride series.  Contact Cory Bryan at Cory@nwoladyirish.com to enter the free-entry tournament in conjunction with the NPF games.