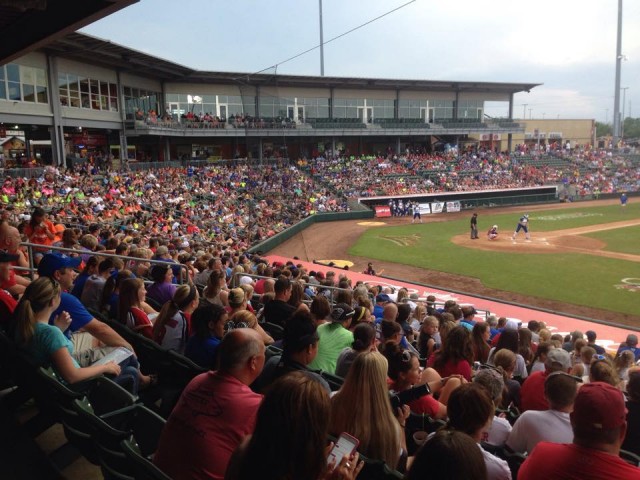 Kansas City, KS-, June 11, 2015 – A 2-run home run by Megan Wiggins was not enough to lift the Pride, as they were defeated by the Dallas Charge for the first time in five tries, 5-2, in front of an outstanding crowd of 3,500 fans, many of them young softball players. The top of the 4th inning was all the Dallas Charge needed, as they scored four runs after sending all nine batters in the lineup to the plate.

The first inning and a half was relatively quiet with only one batter reaching for both teams combined. In the bottom of the second, Andrea Duran got things going with a 4-pitch walk. The All-NPF player Wiggins did not disappoint in her first career game as a member of the Pride, deposing an 0-2 pitch over the wall in Right to give the Pride a 2-0 lead. Lauren Chamberlain and Chelsea Goodacre both added a hit in the inning, but were left on base as a Shelby Pendley screamer was caught by Ashley Burkhardt in Right Field.

Hannah Rogers, the Pride’s starter in the circle, surrendered a lead-off double to Renada Davis to start the game. After that, she was virtually unhittable for the next few innings, retiring the next nine Charge batters in a row. The tides turned in the top of the fourth after the Charge’s Right Fielder, Eri Yamada, worked her first of two walks on the night. Lauren Haeger followed up with a single up the middle. Rogers seemed to have gained her command back while forcing a pop fly from Nicole Morgan. However, that would not be the case as Taylor Thom laid down an RBI suicide squeeze in which all runners were safe. After a Mikey Kenney walk, Danielle Henderson stroked a ball off of the fence to clear the bases and put the Charge up 4-2, a lead they would never relinquish.

Dallas’ pitcher Vanessa Stokes forced three fly outs in the bottom half of the inning, including a towering fly ball by Lauren Chamberlain at the start of the inning. Reliever Lauren Haeger continued this trend, not allowing a single base runner for the next two innings.

The Charge brought home another run in the top of the seventh by virtue of a single in the gap by one of the hottest hitters in the league, Nicole Morgan. A frozen rope by Thom that was destined for the gap was denied by none other than Wiggins, whose full extension dive and catch was her second potential Sportscenter Top Ten play of the night.

In their last chance to stage a comeback, Chamberlain and Amber Freeman were not able to get anything going. Chelsea Goodacre brought life back to the Pride faithful, poking a ball just out of the reach of Thom at second base. That was all the momentum the Pride could muster, as Shelby Pendley made the final out of the game.

The Pride will look to get back to their winning ways Friday night at 8:05pm EST as they wrap up the two-game series with the Dallas Charge at Community America Ballpark in Kansas City.

If you can’t make it to the Ballpark, catch the live stream at http://usssalive.com/usssapride