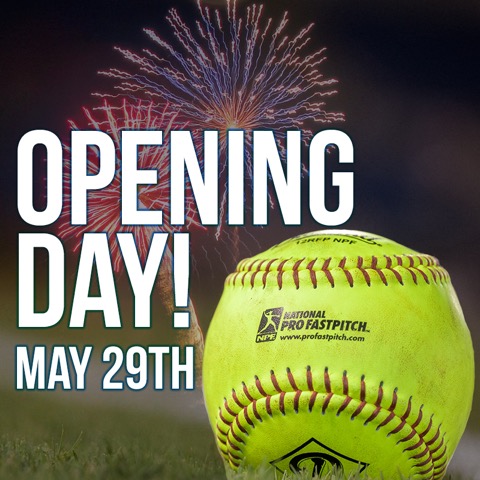 Nashville, TN – May 28, 2015 – National Pro Fastpitch will launch the 2015 regular season on Friday May 29, 2015. The Opening Day match-up will feature the Chicago Bandits visiting PA Rebellion at 7:05 pm ET. The Akron Racers will open their season in Pennsylvania also as they face the Rebellion the following day on Saturday May 30 at 5:05 pm ET.

The Dallas Charge will make their team and league debut as they host the PA Rebellion at home on Wednesday June 3rd at 7:00 pm CT (local time).

The Back to Back defending champs of both the 2014 regular season and the 2014 Championship Series, the USSSA Pride, will open their 2015 season on June 6th against the Dallas Charge, beginning at 7:00 pm CT (local time).

The 2015 NPF regular season schedule features 120 games in 16 venues in 8 different states. The season will conclude with the top 4 regular season finishers heading to Hoover, Alabama for the 2015 NPF Championship Series. The Series will be held for the second year in a row at the Hoover Metropolitan Stadium. The dates for the 2015 Championship Series are August 14-18.

An unprecedented amount of coverage will allow fans to follow all the action through various multi-media sources. CBS Sports Network will deliver 16 regular season games along with the full slate of Championship Series games. All televised games in the CBSSN package will be carried live. Chicago, Dallas and USSSA will live stream all home games. Dallas and Pennsylvania will feature live Internet radio coverage of all home games and Akron will feature radio coverage of select home games. Games can be accessed through the NPF website at www.profastpitch.com/schedule or individual team websites.

Fans can also follow live stats through the Internet on each team’s websites or at www.profastpitch.com/schedule. Live stats will be available for every game of the 2015 regular season and Championship Series. Finally, Facebook, Twitter and Instagram accounts are active for every team as well as the league itself, and will also provide detailed and updated game action and results.

CBSSports.com, for the second season in a row, will host an NPF YouTube channel that will feature game summaries along with extended interviews of players, coaches, owners and officials.

The 2015 season marks the twelfth season of action for National Pro Fastpitch.

National Pro Fastpitch is headquartered in Nashville, Tenn. The league, created to give elite female fastpitch players the opportunity to pursue a professional career in their chosen sport, has operated since 1997 under the names of Women’s Pro Fastpitch (WPF) and Women’s Pro Softball League (WPSL). NPF is the Official Development Partner of Major League Baseball in the category of women’s fastpitch softball since 2002.