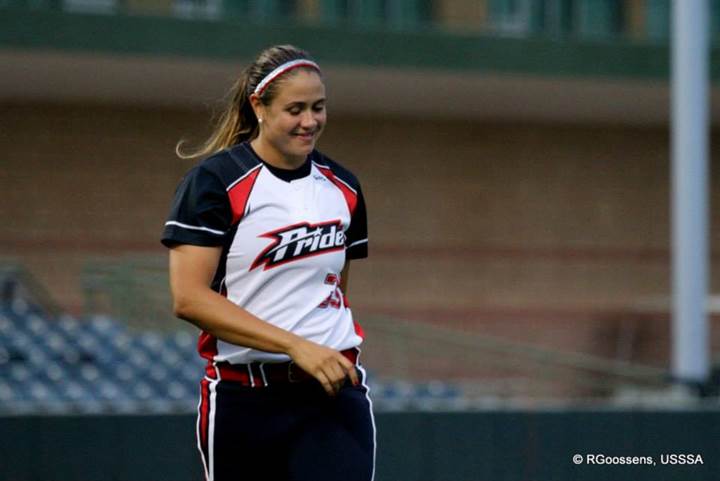 Kissimmee, FL– August 9, 2013- The USSSA Pride recorded their 30th win of the season on Friday night with a 4-0 win over the NY/NJ Comets at Osceola County Stadium in the second game of a four game series in Kissimmee.

Cat Osterman (16-2) was dominant once again in the circle for the Pride, allowing only one hit and recording 16 strikeouts. It was Ostermans league leading 16th win of the season.

The Pride wouldn’t waste any time, scoring in the first inning. GiOnna DiSalvatore would single home Caitlin Lowe give the Pride a 1-0 lead. Andrea Durans sacrifice fly to center would bring home Kelly Kretschman, making it 2-0 going into the second.

Osterman would strike out 11 batters until giving up her first hit of the game to Amanda Kamekona in the fifth inning. Osterman struck out Amy Hooks in the next at bat to give her 12 strikeouts after five innings.

GiOnna DiSalvatore struck again in the fifth, hitting a two run homerun to deep center, bringing home Watley who had singled earlier in the inning. The Pride held a 4-0 lead after five.

DiSalvatore’s home run would be all the Pride would need, winning 4-0 to keep the Pride in the hunt for first place. DiSalvatore would add more RBI to her total tonight, going 3-3 with three RBI for the Pride. Megan Willis and Natasha Watley also added a couple hits a piece for the Pride.

Osterman (16-3) would get the win, finishing with 16 strikeouts, two walks and giving up only one hit.

Olivia Galati (5-10) would suffer her 10th loss of the season. She would give up ten hits, 4 runs, walk a batter and strike out four.