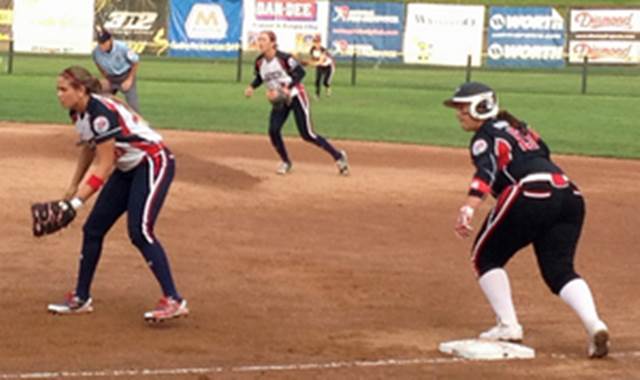 For the third time this series the Pride got on the board early, taking a 1-0 lead over the Racers in the top of the first inning. After getting two quick outs, Fico gave up one run but struck out Francesca Enea to end the early threat.

Fico lasted until the fourth inning, when Hillary Bach relieved her with two outs. Bach pitched one complete inning, giving up two runs on four hits. Jen Mineau finished the game for Akron, pitching just over two innings of scoreless relief, giving up one hit and catching Keilani Ricketts looking to end the fifth inning.

The Racers had a chance in the bottom of the second, loading the bases with two outs thanks to two walks and a fielder’s choice, but Osterman sent Brianna Turang down swinging on three pitches to end the inning.

Osterman held Akron hitless and scoreless until the bottom of the fourth inning when Brigette Del Ponte and Jessica Garcia hit back-to-back two-out singles. With Aja Paculba at the plate, Del Ponte executed a perfect delay steal and came around to score four pitches later on Paculba’s single. But Turang went down on strikes again to end the home threat. The Racers got on the board again in the bottom of the fifth inning, scoring their second run on Charlotte Morgan’s sixth home run of the season, a high-flying solo shot that just escaped over the left field fence. In the end, however, Osterman held the Racers to just two runs on five hits for her 15th win of the season. Fico took the loss for Akron, her fifth of the season.