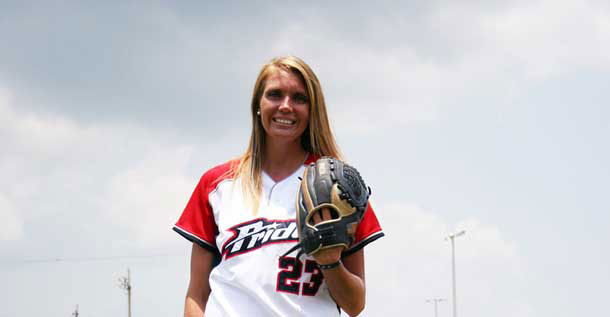 Marion, IL – The Pride smoked the NPF Diamonds for the four-game series sweep, 12-2, Sunday from Rent One Park. Sarah Pauly grabbed her first victory of the season, going the distance for the second time this year. Jessica Mendoza’s three-run homer in the fifth inning was the highlight of the afternoon. Five Pride players had multiple-hit days, giving Rhiannon Kliesing her second loss of the season.With the Pride victory, USSSA moves into sole possession of first place in the National Pro Fastpitch league.

Sarah Pauly won her first game of the season, amidst her second complete-game of 2011. The lanky right-hander allowed two runs off four hits, while striking out nine and walking just two Diamond batters. Pauly moves her record to 1-2 with the win.

Jessica Mendoza had a two-hit afternoon, including a three-run homer, her fourth of the season. Natasha Watley, Caitlin Lowe, Alissa Haber and Francesca Enea all had multiple-hit games. Alissa Haber smoked three hits during the game, including two RBIs and three runs scored. Enea drove in three runs off her two hits. The Pride struck for 12 runs off 11 hits in the game.

GiOnna DiSalvatore had the only multiple-hit game for the Diamonds players, after Pauly allowed just four hits all afternoon, stifling the NPF offensive attack.

Rhiannon Kliesing allowed all 12 runs of the game off 11 hits, walking six and striking out two, as she moves her record to 0-2 on the season.

The Diamonds and Pride will head back to Florida following the game. 1,202 fans crossed the gates at Rent One Park for the Sunday afternoon finale, tallying over 5,000-plus fans in total over the weekend from Marion, Illinois