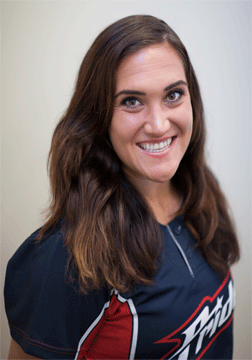 Kissimmee, FL-July 7, 2014-Nelson Mandela believed “Sport has the power to change the world.” One of the world’s greatest leaders and social change activists went on to say “Sport can create hope where once there was only despair.” USSSA Florida Pride pitcher Jordan Taylor is living Mandela’s beliefs.  Taylor has been using the power of sport to create positive social change and hope since her days at the University of Michigan.

The name Jordan Taylor is etched throughout the University of Michigan softball record books. But the Wolverine’s all-time wins and strikeout leader has left a legacy in Ann Arbor well beyond the pitching circle. She believes her role as a professional softball player in the National Pro Fastpitch (NPF) is to use her sport platform to be an inspiration for others.

“The biggest part for me is that I’m not playing softball professionally to make money. This group of girls is trying to grow the sport and I think it’s important you realize you are a role model for all these little kids while you are playing.”

Taylor has embraced being a role model since her days in maize and blue. The University of Michigan athletic department has a program called From the Heart where Michigan student-athletes visit C.S. Mott Children’s Hospital to provide friendship and optimism to the young patients in Mott’s Pediatric Cancer Center. Every Thursday, when her schedule permitted, Taylor volunteered alongside fellow Wolverine athletes at the hospital.  The selfless hours she spent interacting with these young children and their families touched her life forever.

“It was a lot of fun to go in there and hear their stories and you would never meet the same person. They have an entire wall of pictures with stories of survival of Mott patients. Pictures of the children inside the hospital were in black-and-white, juxtaposed to color prints of them outside the hospital. It’s incredibly inspiring,” said Taylor of her experience at Mott.

Those stories hit home with Taylor as she is no stranger to the effects of cancer.  Her grandmother, Elizabeth Sloan, died of cancer when Taylor was nine years old and her father, John Taylor, passed away from cancer in 2009 at the start of Jordan’s sophomore year of college.

Touched by her experiences with From the Heart and her own personal experiences with cancer, Taylor has become a role model for other athletes looking to use their sport platform to change the world. In the summer of 2012, Taylor started a non-profit initiative called FIGHT. To her, the name symbolized the fight cancer patients and their families go through.

“Watching someone go through cancer is both heart wrenching and inspiring. Through battling this disease, people turn into different versions of themselves—all fear is put aside, no longer caring about every day, typical things. They become superhuman versions of themselves. They dedicate all their energy to beating cancer, literally in a fight for their lives.”

Originally, she wanted to raise money for the cancer her father passed away from, but guidance from a Michigan softball fan who was also a professor at Mott’s teaching hospital, funneled Taylor’s FIGHT charity towards the place that has touched her heart since her freshman year in Ann Arbor—C.S. Mott’s Children’s Hospital. To raise money for FIGHT and the young patients at Mott, Taylor combines two of her biggest passions and talents—softball and art.

Art has always played an impactful role in Jordan Taylor’s life. “Art classes for me were so important because that’s where I really shined and felt comfortable and I can’t image getting my education without art.” One way Taylor raises money for FIGHT is by selling her own original artwork and clothing accessories she creates. She hopes that her love of art can be shared at C.S. Mott through her FIGHT donations. Her goal is to donate money towards art classes where young patients can create art pieces to hang in their rooms and create a more home-like atmosphere.

Jordan Taylor’s So You Think You Can Hit? event at the University of Louisville

Her sport platform has inspired her biggest fundraising event for FIGHT. Many times in college, Michigan football players and other non-softball players would challenge Taylor, claiming they could “take her deep.” After graduation, Taylor decided to accept this challenge–for a price. She created an event called So You Think You Can Hit? where anyone can pay to see five pitches off Taylor. (She offers a free t-shirt for anyone who gets a hit. To date, she has not given away ANY free t-shirts!).

So far, she has hosted five events throughout the country, including two at Michigan and one in her hometown of Valencia, California. She has raised close to $3,000 through her events and hopes to continue using her NPF platform to host more events, all with an intention of raising money to create a happier environment for the children at C.S. Mott.

The greatest thing about Taylor’s FIGHT initiative is she discovered her own unique ways to give back. Her own unique way to use her sport platform and passions to create hope for children who are fighting for their lives. Though she may not be able to donate millions towards cancer research like fellow Michigan athlete alums, she has discovered her own ways to be a role model and inspire the young patients at C.S. Mott.

“I know I can’t raise the millions like Braylon Edwards and Charles Woodson, that’s not possible. So for me, I wanted to use softball and tie art into what I’m doing with the money I raise,” said Taylor.

Softball has been a part of Jordan Taylor’s life, but not the whole piece. She uses her sport platform to create hope for others who have experienced the same despairs of cancer that she has. And she does it all in a way that is unique to her own story. So You Think You Can Hit off Jordan Taylor? I doubt you will, but at least you know standing in the box against her will help create a better world for others.

To find out more about Jordan Taylor’s FIGHT organization and how to donate to FIGHT, visit her website at Jordan Taylor-softball.