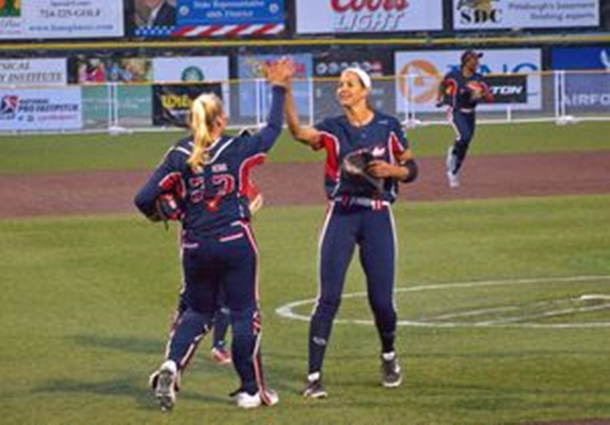 Washington, PA- July 5, 2014 – The Pennsylvania Rebellion, presented by The Coury Financial Group, were defeated by the USSSA Pride and former USA Olympian Cat Osterman as she hurled a no-hit, no-run performance for the USSSA Pride. Rebellion starter Dallas Escobedo suffered the 7-0 defeat.

The Pride tried to light up the scoreboard early in the top of the second when catcher Kristin Sandberg smacked a fly into deep left-center. Out of nowhere, however, came Rebellion left fielder Angeline Quiocho to make the over-the-wall grab, keeping the score at 0-0 early.

The Pennsylvania offense tired diligently, but was unable to crack Osterman’s armor. Osterman finished her complete game with 12 K’s and only two walks.

USSSA took the lead in the top of the third when center fielder Caitlin Lowe knocked a sacrificefly into left field to score shortstop Madison Shipman. Two runs came across in the fourth inning for the Pride thanks to run-scoring singles from third baseman Andrea Duran and pinch hitter Bridgette Del Ponte.

After the Pride extended their lead to five runs in the top of the fifth inning off of the bats of Shipman and first baseman GiOnna DiSalvatore, the Rebellion looked to have the tides turned when designated player Courtney Liddle battled at the plate, forcing the count to 3-2 and eventually drawing the walk: Pennsylvania’s first base runner of the contest. A walk by third baseman Jenn Salling later in the inning gave the Rebellion a chance to end Osterman’s shutout bid, but Pennsylvania was unable to capitalize on the opportunity.

Two more runs came across for USSSA in the top of the sixth, putting the score at 7-0.

Pennsylvania did not go down without a fight, however, hitting hard line drives in the seventh inning, but unfortunately for the Rebellion, the Pride defense was able to trounce any chances of a comeback.