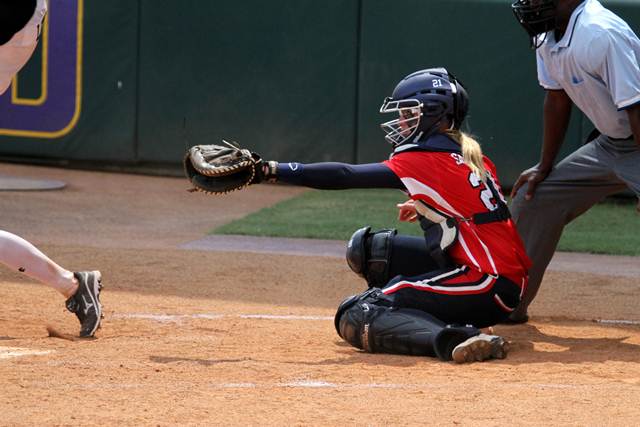 Kannapolis, NC- Diamonds fans saw a pitching dual between Katie Burkhart (8-9) and Danielle Lawrie (7-2) that was tarnished by three Diamond errors and another loss to the Pride with a final score of 4-1.

The Pride’s Natasha Watley started the game and the Diamonds’ error count when she slapped towards third base and the ball was bobbled.  Kretschman hit a blooper over Villarreal’s head at second that scored Watley and gave the Pride an early 1-0 lead.

After the early Pride score, it became a pitcher’s dual until the bottom of the fourth.  DiSalvatore had her second hit of the evening followed by Lawrie hitting Folden with a pitch then walking Weseman to load the bases.  Kamekona hit an infield grounder but it was enough to allow DiSalvatore to score the Diamonds’ only run of the game and tie the score 1-1.

In the top of the sixth, Diamonds had gotten two outs with Duran on first when Burkhart walked Lapin.  Watley hit a single to left field scoring Duran.  After taking the cut-off, Weseman attempted to pick-off Lappin at second base but the throw was missed and went to the outfield fence allowing both Lappin and Watley to score two unearned runs.  The inning allowed the Pride to put 3 more runs on the board and the final score of 4-1.

Diamonds are now behind in the series 0-3.

The final game of the series and the last Diamonds home game for the Season will be played at CMC NorthEast Stadium – Home of the Kannapolis Intimidators.  The game will be Sunday with a 5:05 start.  Tickets can be purchased on-line at www.yourcarolinadiamonds.com or day of the game at the Box Office.