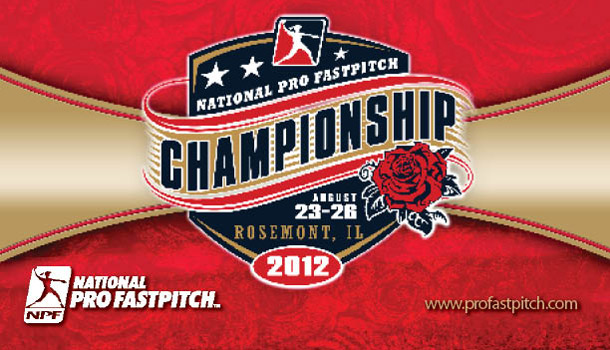 The Ballpark at Rosemont

ROSEMONT, Ill. – Led by a two home run night by NPF Offensive Player of the Year Sam Marder, the No. 4 seed Akron Racers roared back from a five-run deficit Friday night to defeat the top-seeded USSSA Pride 8-7 and force a third game in their best two-out-of-three semifinal series at the 2012 NPF Championship Series.

The Pride put six of their runs on the board in the first two innings, aided by an 8-for-12 night from the top three batters in their lineup including a six RBI night for Jessica Mendoza on two home runs and a triple. Akron roared all the way back to grab an 8-6 lead on the strength of a six-run sixth inning before holding off a final Pride rally for the win.

NPF Offensive Player of the Year Marder put Akron in the lead early with a two-out solo home run in the top of the first off Pride starter Danielle Lawrie. Marder had eight home runs and 27 RBIs during the 2012 regular season.

The Pride immediately wrestled the lead away in the bottom of the first courtesy of a two-run homer for All-NPF selection Mendoza that soared high into the evening sky before dropping just beyond the fence for a 2-1 lead. The Akron defense, specifically shortstop Aja Paculba, helped starting pitcher Hillary Bach keep the Pride at two runs with a pair of acrobatic stops including an inning-ending lunge to snare an Ashley Charters line drive.

Megan Willis walked and Charlotte Morgan smashed a single into left to lead off the Pride second, prompting Akron to insert Lisa Norris into the circle in relief. USSSA then loaded the bases prior to an RBI Caitlin Lowe single and a bases-clearing triple from Mendoza to push the Pride to an early 6-1 lead.

Akron mounted a rally in the top of the fifth, beginning with a leadoff single from Paculba. She then motored all the way around to score when Lisa Modglin ripped a double just inside the bag at third to cut the Racers’ deficit to 6-2.

Akron kept coming in the top of the sixth, beginning when Nicole Pauly was hit by a pitch and Nicole Trimboli drew a walk. One out later, a Watley error at short allowed Pauly to come home. When Paculba’s second single of the game fell just in front of Lowe in center to load the bases still with one out, Game One winner Cat Osterman came in to pitch in relief of Lawrie.

Racer pinch hitter Jessica Garcia swung at the first pitch Osterman threw, dumping a two-run single into right, then Modglin’s third hit of the game tied the score, 6-6. Marder then unleashed a colossal home run to left center to stake the Racers their first lead of the series, 8-6.

The Pride did not go quietly into the Rosemont night, cutting their deficit to a single run when Mendoza tomahawked a leadoff home run into the right field bleachers before Norris retired the next three batters in order to end the game.

Modglin went 3-for-4 in the game with an RBI and a run scored for Akron while Marder finished 2-for-3 with four RBIs and two runs scored. Paculba had a 2-for-4 night with a pair of runs.

In addition to Mendoza’s big night for the Pride, Watley had three hits and a run scored and Lowe finished 2-for-4 with a pair of runs and an RBI.

Osterman (1-1) took the loss in the game, allowing two runs on three hits and a walk with three strikeouts in 1.2 innings of work. Lawrie pitched 5.1 innings, giving up six runs on seven hits and two walks with five strikeouts.

Norris earned the win in relief for Akron, tossing 6.0 innings and giving up three runs on seven hits and no walks with 10 strikeouts. Bach threw one-plus inning and allowed four runs on three hits with two walks in the start for Akron.

The two teams will battle in the third and final game of this semifinal series at 11 a.m. CT tomorrow, Saturday, Aug. 25.