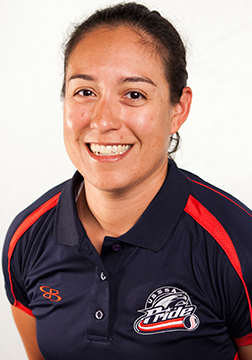 Sonya grew up playing a great deal of soccer and passed up an opportunity to play in college in order to devote her energy on school. Montoya says she originally wanted to be a physical therapist especially to help those who were injured while playing sports – not knowing that athletic training was a career option. After taking an introduction class to athletic training suggested by an advisor, Montoya reflects “after the first week of classes I was hooked. I ended up changing my major.” Sonya joined the USSSA staff back in 2010 and enters her sixth year as athletic trainer of the Pride. Montoya is a 2007 graduate of Longwood University with a Bachelor of Science Degree in Kinesiology with a concentration in Athletic Training and in May 2010 earned her Masters in Arts: Health and Wellness with Applied Exercise Science from the University of Central Florida.