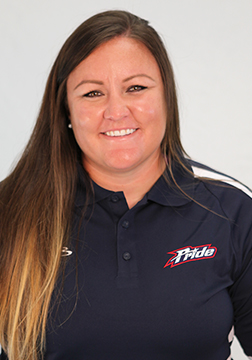 2016: Joined the Pride coaching staff as Assistant Coach before the 2016 NPF season.

2016: Entered her second year as a member of the Mississippi State coaching staff after spending the three years prior as an assistant coach at Wichita State University.

Ricketts was part of the MVC Coaching Staff of the Year, helping to improve the Shockers from the ninth place in 2012, to eighth place in 2013, to MVC champs in 2014.

2014: Individually, Ricketts produced five starters who each hit better than .300 in 2014 after the squad did not have a batter hit over .300 in 2013. The Shockers scored 138 more runs, smashed 26 more home runs, hit 11 more doubles and added seven more triples last spring than in the 2013 season. Overall, the 2014 team established the program single-season records for batting average, slugging percentage, on-base percentage, runs scored, hits, doubles, home runs, runs batted in and total bases. Under Ricketts’ guidance, Cacy Williams was a National Fastpitch Coaches Association (NFCA) All-Midwest Region First-Team honoree in 2014 as well as becoming the first student-athlete in MVC history to receive Player of the Year and Newcomer of the Year honors from the league. She broke the Wichita State single-season records for batting average (.424), slugging percentage (.812), on-base percentage (.531), total bases (138), runs scored (57), home runs (16) and RBI (47). Brittany Fortner joined Williams on the MVC First Team and was an NFCA All-Midwest Region Second-Team selection. She tallied 14 doubles, two shy of the program record, and finished with a .358 batting average, 62 hits, 35 RBI and a .578 slugging percentage.

2013: Ricketts oversaw a 12-point jump in team batting average from 2012 while helping the squad to 17 more doubles and seven additional home runs. She also helped Erin Carney earn a spot on the All- MVC First Team. the Shockers improved their hitting numbers across the board under Ricketts guidance improving their batting average from .231-to-.243, clubbing 17 more doubles, and an additional seven home runs. Helped improve the Shockers from a 9th place finish to 8th.

2010: Began her coaching career at the University of Oklahoma as Graduate Assistant Coach for the Sooners under Head Coach Patty Gasso.

At the conclusion of her four-year Oklahoma playing career in 2009, Ricketts was the record holder in career home runs (48) and runs batted in (239) while ranking third in extra-base hits (97), total bases (444), slugging percentage (.645) and on-base percentage (.461). She started 192 consecutive games and ended her career as the Big 12 career RBI leader.

In 2008, she was named to the Preseason USA Softball National Player of the Year Watch List and ESPN.com’s Preseason All-America second team. Ricketts ended her junior season with All-Big 12 Tournament honors.

As a sophomore in 2007, Ricketts was a second-team All-American and first team NFCA All-Midwest Region selection. She became the first Sooner to be a top-three finalist for the USA Softball Player of the Year award after topping all Division I players in runs batted in during the regular season. She was the lone freshman in 2006 to earn All-Big 12 first team honors and was selected as a member of the NFCA All-Midwest Region squad.

Ricketts began her coaching career on the Oklahoma softball staff as a graduate assistant coach, in 2010 and 2011. During that time she played in the National Pro Fastpitch (NPF) league with the Akron Racers. She was the 12th overall pick in the 2009 NPF Draft.

Played for two seasons in the NPF with the Akron Racers (2009, 2010). Earned her bachelor’s degree in Sociology from the University of Oklahoma in 2009 and her master’s of education in adult higher education with an emphasis in intercollegiate athletic administration in December of 2011. Has three younger siblings who all played collegiate athletics. Her sister Stephanie graduated in 2012 after an All-American pitching career at the University of Hawai’i and her sister Keilani graduated from the University of Oklahoma and has been a member of the USSSA Pride since 2013. Her younger brother Richard played football at the Air Force Academy.