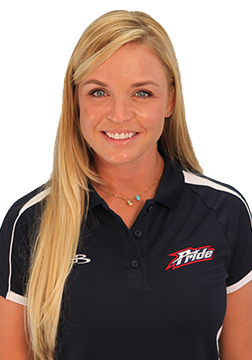 2016: Joined the Pride coaching staff as Assistant Coach before the 2016 NPF season following eight years playing in the NPF.

Professional: Willis played eight years in the National Pro Fastpitch League (NPF). She played for the Chicago Bandits in 2007 and teamed with former Longhorn Cat Osterman to win the league title with the Rockford Thunder in 2009. She joined the USSSA Pride in 2010 and led the Pride to their first NPF Cowles Cup Champion.

2013 Season: Continued her steady play behind the plate without committing a single error in 18 games caught. She hit .256 with 7 RBI. Came up big gunning out two base runners during the Pride’s run through the championship series.

College: During her UT playing career, Willis was a four-year starter behind the plate and twice earned Big 12 Defensive Player of the Year accolades (2006-07). She led the Horns to a Big 12 Conference title in 2006 and a Big 12 Tournament championship in 2005. The strong-armed catcher posted school records for fielding percentage (.994) and putouts (2028) and gunned down 59 would-be base stealers in her career.

Born Megan Jo Willis on February 8, 1985 to Michael Willis and Delain Anderson. Graduated from the University of Texas in 2007 with a degree in Corporate Communications. Has two brothers, Jason and Josh Willis. In between her two seasons in the NPF, Willis worked for Lululemon Athletica in Austin. At Lululemon she helped build a presence in the local community, communicated the culture of the company and marketed the brand.