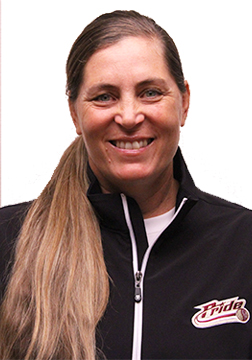 2016: Joined the Pride coaching staff as Head Coach before the 2016 NPF season.

2016: Alameda led Florida State back to the WCWS, reaching the semifinals for the third time in school history and ending with a No. 4 national ranking, which tied for the highest final NFCA ranking ever for FSU. The Noles posted a 55-10 record, including 11 wins over ranked opponents. FSU defeated No. 2 Michigan (1-0) and No. 3 Auburn (4-3), marking the highest ranked wins at FSU under Alameda, and both coming away from Tallahassee as the Auburn win came on the road and the Michigan victory at the WCWS. The Noles finished 2016 with a 21-2 record in conference play and extended their ACC series unbeaten streak to 33, posting a 29-0-4 series record against conference opponents since 2012. No current Florida State player has ever lost a series to a conference opponent as the Noles have earned a record of 83-10 in their last 93 ACC regular season games. Alameda earned ACC Coach of the Year for the fourth straight season in 2016 as Jessica Burroughs and Alex Powers earned ACC Pitcher and Player of the Year honors, respectively. FSU set an ACC record with six members on the All-ACC First Team as Burroughs and Powers were joined by Ellie Cooper, Meghan King, Morgan Klaevemann and Jessica Warren. Burroughs, Powers and Warren were named NFCA All-Americans, marking the sixth time that FSU had three All-Americans in the same season.

2015: The Seminoles reached the NCAA Super Regionals for the third consecutive season in 2015, finishing with a record of 49-14 and a No. 10 ranking in the final poll by the NFCA. FSU earned a trio of conference awards as Jessica Warren was named ACC Freshman of the Year, Lacey Waldrop secured ACC Pitcher of the Year honors for the second-straight season and Alameda was chosen as the ACC Coach of the Year for the third consecutive year. The Noles earned 11 wins against ranked opponents in 2015 and have 37 ranked wins overall in Alameda’s seven seasons at the helm of FSU. Several Seminoles etched their name into the NCAA record book as senior Maddie O’Brien led the nation with 73 walks, good for No. 11 all-time in NCAA history. Freshman Morgan Klaevemann’s 26-game hitting streak is the second-longest in FSU history and ranks No. 24 overall in NCAA history.

2013: It was an impressive season in 2013 for the Seminoles as they fought through several injuries to key players yet reached the NCAA Super Regionals for the first time since 2006 following a miraculous comeback against South Alabama in the Mobile Regional championship game. The five-run comeback with two outs in the top of the seventh against the 13th-seeded Jaguars personified the team’s never-say-die attitude. FSU finished with a 44-19 record and Alameda was named the ACC Coach of the Year, along with a school-record four All-ACC First Team selections and five overall. The Seminoles set a new school mark with an 18-2 record in ACC play en route to the program’s 11th ACC regular season title. As the pitching coach, Alameda was influential on one of the most dynamic duos in the nation in Lacey Waldrop and Monica Perry. Waldrop earned NFCA Third-Team All-America honors, the first at Florida State since 2009, while Perry emerged as the most dominant pitcher in ACC play. Aside from the five total All-ACC Team members in 2013, Alameda coached her first ACC Scholar Athlete of the Year when Kelly Hensley was recognized for the honor. Hensley also was named to the Capital One Academic All-America Third Team.

2012: In 2012, the Seminoles achieved a mark of 47-16, their most wins since going 62-12 in 2004. Alameda led FSU to a 15-13 record against NCAA postseason teams throughout the year, which included nationally-ranked victories over No. 14 UCLA, No. 23 North Carolina twice and Women’s College World Series participant LSU. As the team’s pitching coach, Alameda’s influence on FSU starters Lacey Waldrop and Monica Perry was enormous. Both pitchers finished in the Top 30 nationally in earned run average, making FSU one of just five programs to have multiple pitchers in the top 30. Each hurler earned ACC Pitcher of the Week honors twice, and were named to the All-ACC squad. As a unit, the Seminoles finished 10th in the country with a 1.53 team ERA. In 2012, four more student-athletes made the All-ACC Team under Alameda’s watch including Tiffani Brown, Briana Hamilton, Perry and Waldrop. Brown and Shayla Jackson also were named to the NFCA All-Southeast Region Second Team.

2011: In just her third season as head coach at Florida State, Alameda helped the Seminole softball program snap a seven-year ACC title drought to highlight an entertaining 2011 season. Despite making the conference tournament in Atlanta as the No. 4 seed, it was Alameda’s season-long coaching tactics combined with the energy of her motivated group that enabled the Seminoles to storm through the competition and defeat second-seeded North Carolina, 4-1, to clinch an automatic NCAA Regional bid. Under Alameda’s guidance, the 2011 Seminoles created a noteworthy program achievement – for the first time in school history, FSU softball reached 12 consecutive NCAA Regionals. Her group also won two games in the Athens Regional, defeating Georgia State and UAB, to get to the final day of a regional for the first time since 2006. Adding to Alameda’s on and off-field influence, Sarah Hamilton became just one of two conference players in 2011 to be named to the All-ACC Team for the third time in her career. Shayla Jackson and Jen Lapicki joined Hamilton on the 2011 all-conference squad. Hamilton ended her illustrious career as one of the best pitchers in school history, with Alameda playing a large role in her success. Among her noteworthy feats, Hamilton became the first hurler in FSU history to finish with at least 1,000 career strikeouts, ending her four-year stay with 1,005 Ks.

2010: In her second season as FSU head coach in 2010, Alameda led the Seminoles to a 44-18 record and second-consecutive appearance in not just the ACC Championship game but its 11th-straight appearance in the NCAA Division I Softball Championship. At the time, FSU’s ACC Championship game appearance marked the 14th time in school history it had the chance to play for a title – a total number that is more than any other school in the conference. Under Alameda’s tutelage, the 2010 Seminoles accomplished a lot of statistical feats. Not only did FSU get off to its best start since 1993 by starting the year 20-2, but the team capped off the year with high marks in a bevy of categories. The Seminoles’ .297 batting average was the best since 2003 and their 226 strikeouts at the plate were the fewest since the 1998 campaign.

2009: Alameda came to Florida State prior to the 2009 season and went on to surpass 200 career coaching victories in her first year in Tallahassee (she picked up win No. 300 on March 17, 2012 against Fairfield and added win No. 400 at North Carolina on March 30, 2014). The Seminoles finished the 2009 campaign with a 44-16 record and achieved the best conference record in school history at the time with a 17-4 league mark. For her team’s exploits on the field in 2009, Alameda and the Seminoles had the opportunity to host a regional in the NCAA Tournament for the first time since the 2004 season. Alameda coached several Seminoles that garnered postseason awards as Hamilton was named a Third Team Louisville Slugger/NFCA Division I All-American as a sophomore. Hamilton was also named ACC Pitcher of the Year, an ACC First Team member and to the Louisville Slugger/NFCA All-Southeast Region Team. Then-senior catcher Kaleigh Rafter was also named to the All-Region team and was an All-ACC First Team member as well. Wynn and Gober (both second team) were also student-athletes coached by Alameda who were recognized as All-ACC players.

2007: Finished with a 37-27 mark as Alameda earned MWC Coach of the Year honors for the second time.

2005: The 2005 season featured an assault on the program’s record book, appearances in the national statistical rankings and the introduction of several conference and national award winners. The 44 wins were the third-most in the program’s history, while the 17 Mountain West Conference wins were the most-ever since joining the league in 1999. After being predicted to finish last in the league, UNLV excelled, placing second in the league in both the regular season and Mountain West Conference tournament.

2004:Alameda went 25-35 in her first season at UNLV in 2004, which was a four-game improvement over 2003’s final tally. She then posted a staggering 44-19 mark in 2005 and the program’s first trip to NCAA Regionals since 1996. Alameda was named Mountain West Conference Coach of the Year in 2005 and the entire staff garnered NFCA West Regional Coaching Staff of the Year honors.

Guided the Cardinals to a 320-179-1 record and six straight NCAA Regional appearances. She oversaw the pitching staff there and produced three All-Americans: Becky Blevins, Marcy Crouch and Dana Sorenson.

Alameda spent two seasons as an assistant coach at Barry University in Miami Shores, FL. She helped the Buccaneers to a fifth-place NCAA Division II finish in just her first year.

From 2004 to 2008 helped in the development of Canada’s National Team. She aided Canada up until the 2004 Summer Olympics and resumed as an assistant following the Rebels’ 2005 season. In the summer of 2006, Canada qualified for the 2008 Summer Olympics in Beijing, China, after its strong showing in the World Championships. Alameda spent the summer of 2008 with the Canadian team which ended its quest for the gold with a fourth-place finish at the Beijing Olympic Games. She also spent some time serving as an instructor for both the Aruba (1995) and Spanish (2000) national teams.

An all-around great athlete, Alameda began her collegiate career as a pitcher at St. Mary’s University (San Antonio, Texas) where she led the Rattlers to the NAIA Tournament in her only season. She later transferred to Oklahoma in 1989 and played softball and volleyball for the Sooners. She was a two-time All-Big Eight selection as a first and third baseman, while hitting .359 as a senior in 1992. Alameda played softball professionally in Europe for a season before beginning her coaching career.

Born Alana Maree Alameda on June 11th. Earned her bachelor’s degree in communications from Oklahoma in 1993.