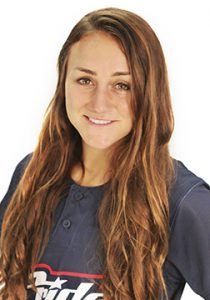 PROFESSIONAL: Jolene is entering her 3rd season in the NPF but her second in a Pride uniform. Named to the 2016 All-NPF team in her second year. Signed with USSSA as a free agent on May 10, 2016. Henderson was originally drafted by the Chicago Bandits in 2013 but sat out due to an ACL injury and missed the 2014 NPF season to play for Team USA. Officially began her NPF career in 2015 with the Dallas Charge.

2016 Season: Jolene started 13 games and completed her first season with USSSA with a winning record of 10 wins and 4 losses. In 71 innings pitched Jolene struck out 54 batters and kept her opponents to a .237 batting average. She ended the 2016 season with 3 games in relief and kept her ERA at 2.07. Her performance earned her a spot on the 2016 All-NPF team for the first time in her professional career.

2015 Season: Joined the NPF as the first player to sign with the Dallas Charge in their inaugural season. Finished her rookie season 7th in the NPF with a 2.18 ERA and 4th with 29 strikeouts looking. Overall, she struck out 59 hitters in 86.2 innings of work.