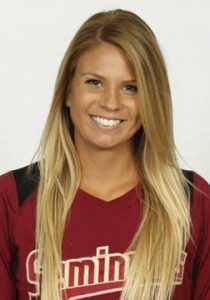 PROFESSIONAL: Jessica enters her first season with the USSSA Pride. Burroughs was drafted 1st overall out of Florida State in the 2017 NPF College Draft by the USSSA Pride.

COLLEGE: Redshirt Junior (2016): Earned NFCA All-American honors for the first time in her career as she was selected to the Third Team. Named ACC Pitcher of the Year and was named to the Women’s College World Series All-Tournament Team as she helped lead the Noles to the WCWS for the second time in the last three seasons. Posted a 29-5 record with a 1.86 ERA and one save, including 14 complete games and six shutouts. Recorded 235 strikeouts in 203.0 innings, limiting opponents to a .168 batting average for the season. Gave up 122 hits, 64 runs, 54 earned, along with 60 walks and three-time ACC Pitcher of the Week. Redshirt Sophomore (2015): Secured ACC Tournament MVP honors along with All-ACC Second Team accolades. Finished the season with a 19-6 record, 2.08 ERA with 219 strikeouts and 185.0 innings pitched. Gave up 115 hits, 70 runs with 55 earned, along with 69 walks as teams batted .171 against her…made 39 appearances with 29 starts. Recorded her first career no-hitter. Redshirt Freshman (2014): Earned All-ACC Second Team honors. Posted a 17-1 record and a 2.08 ERA with 125 strikeouts in 28 appearances with 21 starts. Allowed opponents to hit .198 against her over 114.2 innings. Had 14 appearances where she allowed two or fewer hits. Tossed five complete games with three shutouts. Top 25 finalist for NFCA National Freshman of the Year and named FSU Rookie of the Year by her teammates and coaches. Freshman Season (2013): Redshirted her first year at Florida State. Earned the Seminole Warrior Award for her maximum effort put forth in the weight room.

PERSONAL: Born Jessica Burroughs on November 2, 1993 to Alesia Taylor and Joe Burroughs. Jessica has one sister and majored in Social Science at FSU.