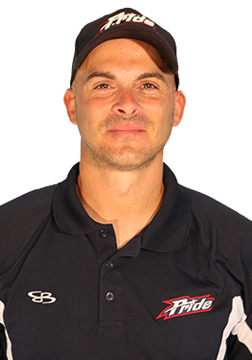 2016: Joined the Pride coaching staff as Assistant Coach before the 2016 NPF season.

Born November 8, 1977 to parents Melvin and Sheila Ellsworth. Has two sisters Shelley Ellsworth and Krista Keough. Married to Lori Ellsworth. Ellsworth has participated in many Canadian Championships throughout his distinguished softball career, representing his home province of Prince Edward Island as well as teams from Newfoundland and Labrador and Ontario as an import. One of the longest serving members of the Men’s National Team, Ellsworth first appeared for Team Canada in 2004 and has played in two ISF World Championships (2009—Bronze and 2013—5th), the 2006 (Silver), 2012 (Gold) and 2014 (Bronze) Pan American Championships as well as several other events. Started playing softball at age 5, drawn to the sport because of the speed of the game. Grew up pretending to pitch and catch for the national team with best friend Roger O’Halloran; when they were younger it was O’Halloran who pushed him to be his best and helped him get over his fear of failure; after O’Halloran passed away at age 27 from athletic heart syndrome he made it his ultimate goal to make the national team for both of them. Graduated from Holland College with a diploma in Sport and Recreation.