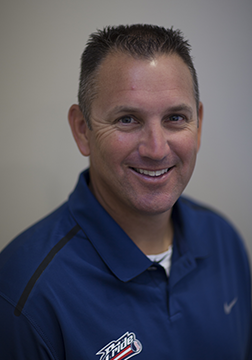 The USSSA Florida Pride is excited to announce the appointment of the University of North Georgia Fastpitch Softball Coach, Mike Davenport to the staff as the Head Coach for the 2015 season.

Mike Davenport is a native of DuQuoin, Illinois and graduate of the University of Florida. Now in his 15th season as head coach of the University of North Georgia softball program and is in his 18th year with the school athletic department. Davenport began his career at North Georgia with the women’s basketball team in 1996 as Assistant Coach and served in that role until 2000 when he took over the roll as Head Softball Coach. His leadership at UNG has fostered a strong team building atmosphere with an emphasis on trust and respect. In his 13 years as head coach, Davenport has accumulated an overall record of 550-173. That record includes seven conference titles, six conference tournament crowns, three region championships and five World Series trips. In addition to that, in 2010 North Georgia won 51 consecutive games which is second best at all levels of collegiate softball.

Davenport joins the Pride coaching staff following the leadership of Georgia Bulldog’s Coach, and previous USSSA Head Coach, Gerry Glasco, who expressed his excitement at the hiring of such a high quality coach:
“We are thrilled to add Coach Davenport to our staff as he is not only a first class coach, but a first class individual that has always been a great communicator with his players! We want to be a team that thrives on competition and a staff that takes great pride helping our athletes to be prepared, and Coach Davenport will be a huge asset in helping us achieve those goals!”

Gordon Glennie, Assistant General Manager to the Pride is equally delighted at the appointment and had this to say:
“We are elated to be able to add Assistant Coach Mike Davenport to our staff . With his knowledge of the game and the respect and trust that previous Head Coach Glasco has in Mike, it will be an awesome staff “

Davenport is a member of the NFCA and outside of his official duties coaching at UNG he runs youth camps at the University over the summer, hosts a Heroes Game for Special Needs Individuals, coaches his daughters 10U Fastpitch team, the North Georgia Express, as well as his son’s 8U baseball team, Tigers Baseball. The entire USSSA Pride staff is excited for him to be a part of the staff and help the Pride continue to gain more wins in the 2015 NPF season.