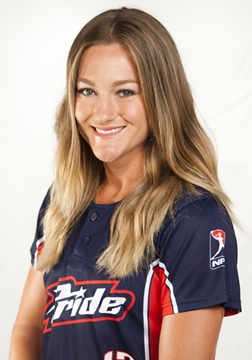 PROFESSIONAL: Enters her 3rd season with the Pride. Hannah Rogers was signed as a free agent by the USSSA Pride before the start of the 2015 season.

2015 Season: Hannah started 6 games and completed her rookie season with a winning record of 3 wins and 2 losses. In 44.2 innings pitched Hannah struck out 29 batters and kept her opponents to a .264 batting average. She ended the 2015 season with 11 games in relief and kept her ERA at 2.98.

PERSONAL: Hannah was born on November 4, 1991. In 2014, she graduated from the University of Florida with a degree in event management. Her hobbies include hanging out with family and friends, working out, dancing, shopping and reading.