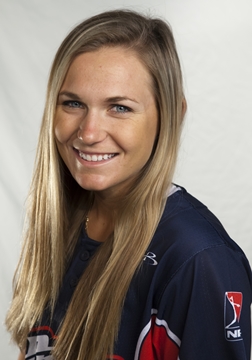 PROFESSIONAL: Hallie enters her third professional season with the Pride. Wilson was the 28th overall selection out of Arizona in the 2015 NPF College Draft by the USSSA Pride. Earned a SportsCenter’s top play recognition following a diving catch in her rookie debut.

2015 Season: In 18 at-bats, Hallie posted 8 hits, 3 RBI and finished her rookie season with a .444 average and .500 slugging percentage. Hallie was also one of two Pride players to earn SportsCenter’s top play recognition following a diving catch in her rookie debut.

PERSONAL: Born Hallie Alexandra Wilson on August 20, 1993 to Jim and Susan Wilson. Hallie has one sister, Emilie. In her free time, enjoys reading and going to the beach. Majored in Journalism with a minor in English.