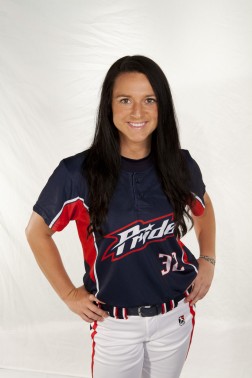 PROFESSIONAL: Williamson is entering her 3rd season in the NPF. Williamson started her NPF career with the Chicago Bandits in 2013. The 2015 season marks her first year in a Pride uniform. USSSA traded utility player Alexa Peterson and the 25th overall pick in the 2015 NPF College Draft to the Pennsylvania Rebellion for the rights to Williamson.

2013 Season: Signed on to the Chicago Bandits as a free agent and earned the title of 2013 Miken NPF Rookieof the year after going 9-2 and posting the third best ERA in the league her rookie season.  She started 13 games for the Bandits in 2013 and struck out 50 hitters in 75.1 innings pitched. Named to All-NPF Team.

COLLEGE: SENIOR (2013): Posted a 33-18 record and a 1.93 ERA with 364 strikeouts in regular-season action and went 4-2 in postseason play. 1st pitcher in Marshall history to earn a conference championship and regional victory. JUNIOR (2012): Appeared in 45 contests with 37 starts. Won a school record 25 games with 268 strikeouts, two shy of the MU single-season mark. Win total was best in Conference USA by four games while her strikeout total was 2nd best. Compiled a 1.50 ERA. 5th best in school history and 3rd best in C-USA. Opponent batting average of .195 was the best in school history and the only one to be below .200 and 3rd in C-USA .Pitched a C-USA high 238.0 innings with the 3rd most shutouts (8) in school history and 26 complete games tied for 4th most in a MU single-season. SOPHOMORE (2011): Finished with team best ERA of 3.66. Led team with 99 strikeouts. Her strikeout total placed her 10th best among conference foes. Recorded 33 strike-outs looking, which was 7th best in C-USA. FRESHMAN (2010): Was on the pitching staff at the University of Tennessee…appeared for 5.0 innings and recorded five strikeouts…helped a strong pitching staff lead the Lady Vols to a No. 16/15 ranking and go 49-15 in 2010 while finishing third at the Women’s College World Series.

High School: Standout athlete at Harts High School and Chapmanville Regional High School…named 2009 EA Sports First-Team Softball All-American, the 2009 Gatorade/RISE Magazine West Virginia State Player of the Year, 2009 West Virginia Sports Writers State Player of the Year, was a four-time First-Team All-State selection and a three-time All-Cardinal Conference honoree…helped CHS to state titles in 2007 and 09…notched over 1,000 career strikeouts…in 2009, went 23-1 in the circle with 356 strikeouts in 153 innings pitched with a 0.09 ERA…broke the state record in single-game strikeouts while tallying 33 in a 13-inning victory.

PERSONAL: Daughter of Andy Paul and Beth Williamson. Father, Andy Paul, played for Marshall basketball from 1987-90 and still ranks 12th all-time in MU records for career assists with 299. Has two brothers, Paul Herbert and Drew, plus one sister, Ali. Majored in Physical Education and Health.