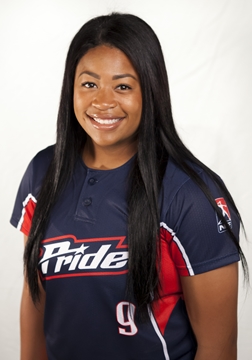 PROFESSIONAL: Amber was drafted 11th overall in the 2015 NPF College draft by the USSSA Pride out of Arizona.

COLLEGE: Ranks fourth in ASU career history with 55 home runs and fifth all-time in career RBI with 194. Her 45 career doubles rank 5th overall in ASU history. Freeman’s 2014 batting average of .424 is ranked 14th in single-season history for those receiving at least 75 at-bats.

PERSONAL: Born Amber Breana Freeman to Michael and Luanne Freeman.  Amber has one sister, Nicole. She is a four-year letter winner at Mater Dei High School and majored in Health Sciences at Arizona State.  Her hobbies include reading, working out and shopping.  A fun fact about Freeman is that she has a three-inch titanium screw in her left hip.