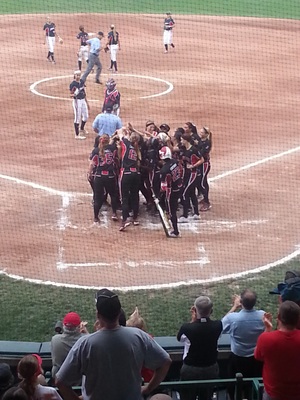 Akron, OH – July 14, 2014 – Cat Osterman has been the most dominant pitcher in National Pro Fastpitch this season. The Racers knew they would have a battle ahead of them with Osterman in the circle.

The Racers bats came alive and got to Osterman in the first inning. Charlotte Morgan launched the first pitch she saw from the hurler over the center field fence to give the Racers an early 1-0 lead. The Racers had Osterman on the ropes, as she hit Brianna Cherry and walked Jessica Garcia, before giving up a single to Kelley Montalvo to drive in the second inning.

A thirty minute rain delay following the inning gave Osterman a chance to regain composure, and she came out firing when the game resumed. Osterman pitched all five innings of the rain shortened game for the Pride, allowing 2 runs on three hits, surrendering two walks while striking out 11.

In the second inning, Lisa Norris gave up a single to Natasha Watley, then got Caitlin Lowe to ground into a fielder’s choice, with Watley out at second. Madison Shipman tied the game for the Pride with one swing of the bat, sending the softball over the centerfield fence and just past the glove of a diving Taylor Schlopy.

The Pride would take the lead in the fourth inning, when Courtney Ceo and Watley singled off of Norris, and Lowe’s double allowed both runners to score.

Norris recorded the loss in the rain shortened game, pitching four innings, allowing four runs on seven hits, while walking two and striking out two Pride hitters. Alison Owen threw the final inning for the Racers, allowing no runs on one hit.

The Racers return to Firestone Stadium tonight, in the final game of the series with the Pride. First pitch will be at 7:05pm EDT, and the game will once again be televised live on CBS Sports Network, beginning at 7pm EDT. For more information or to order tickets, visit www.akronracers.org or call 330-376-8188.

Next Game: Tuesday, July 15 at 7:05pm EDT vs. USSSA Pride at Firestone Stadium in Akron, OH.

About USSSA Florida Pride
The USSSA Florida Pride is a professional franchise in the National Pro Fastpitch League that is owned and operated by USSSA. The amateur organization of USSSA has multi-sport coverage and encompasses teams and players from the United States and abroad.

About Akron Racers
The Akron Racers, headquartered in Akron, OH, are the oldest existing team in the National Pro Fastpitch (NPF) league. The Racers competed in the Women’s Pro Softball League (WPSL) for two seasons in 1999 and 2000 and in the NPF since 2004. Historic Firestone Stadium is home to the Racers and numerous amateur events at all levels of play. The Racers kick-off their 13th season of play in 2014.