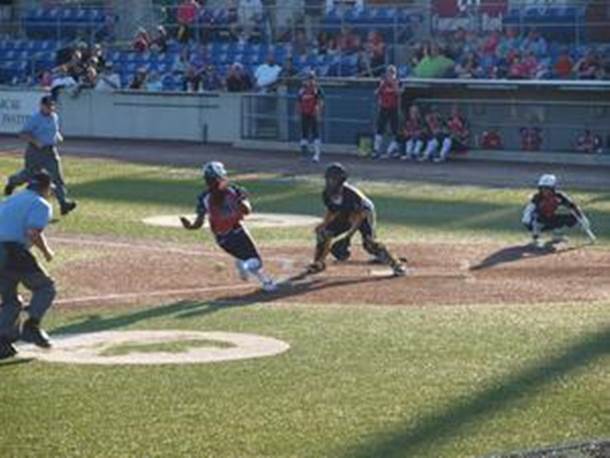 The Rebellion didn’t waste any time getting on the board.  Third baseman Jenn Salling and shortstop Bianca Mejia both battled for walks to lead off the first inning.  With runners on base, catcher Taylor Edwards pulled an inside pitch down the left field line to score Salling.

USSSA was quick to answer the following at bat.  Kristyn Sandberg walked to lead off the second inning and was advanced to third when Andrea Duran laid down a sacrifice bunt.  With one out, Bridgette DelPonte was hit by a pitch to place runners on the corners for Madison Shipman. Shipman delivered an RBI single to centerfield to give the Pride a 2-1 lead.

After three scoreless innings, The Pride added insurance runs in the sixth.  Gi Onna DiSalvatore and Duran both reached base on singles to set the stage for a DelPonte RBI single.  With one out, Shipman belted another single to score two runs, giving USSSA a 5-1 advantage.

The Pride was able to hold off the Rebellion in their final at bat.  However, Pennsylvania fought hard.  Right fielder Brittney Lindley and pinch hitter Mandy Ogle both walked to get on base quickly for Pennsylvania.  Three batters later, Salling smacked a two-out RBI single past the diving USSSA shortstop to make the score 5-2.  With runners on first and third, Mejia brought fans to their feet as she launched a ball to the warning track, but was caught by the USSSA leftfielder to end the game.

Chelsea Thomas threw five and two thirds innings in the circle for USSSA, earning her the win.  Thomas allowed an impressive three hits and one run during her campaign.

Dallas Escobedo received her first loss of 2014 as she got the start for Pennsylvania.  Escobedo pitched a complete game, giving up five runs off of eight hits.