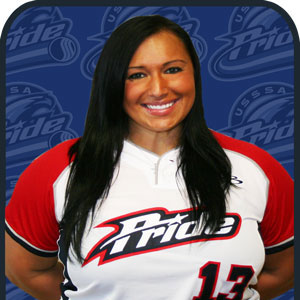 Professional: After finishing her collegiate career at the University of Michigan, Findlay was drafted by the Chicago bandits in 2008, where she spent three seasons and won an NPF championship in 2008. For two consecutive seasons (2009 & 2010), she was named to the All-NPF team. In 2009 Findlay was named to the All-NPF team after leading the league in home runs with 11 and RBIs with 27 while leading the Bandits in walks on the season with 18 and her 18 runs scored were good for fourth on the team. In 2010 she batted a low .248 but made up for it by hitting 11 homeruns  which was good for 2nd under her teammate Stacy May and having 25 RBI which tied Kelly Kretchman for 2nd in the league. After the 2010 she was shockingly released by Chicago and then signed by the USSSA Pride. Samantha will join the USSSA Pride for the 2011 season in hopes of helping them win a second NPF Championship in a row.

College: While at Michigan, Findlay helped the Wolverines to two Big Ten regular-season championships, two Big Ten Tournament titles and four NCAA Tournaments. During the 2005 National Championship game Findlay had the game winning homerun to win the title. The homerun earned Findlay the NCAA Tournament’s Most Outstanding Player.  A four-time all Big Ten honoree, Findlay is Michigan’s record holder for home runs (62), RBI (219) and walks (157). In 2005, Findlay was named the Big Ten Freshman of the Year along with being the University of Michigan’s freshman of the Year.

Personal: Findlay was an All-State first baseman at Lockport High School and led the Porters to the state championship her senior year. She went 10-for-10 in the state quarterfinals, semifinals and title game. She smashed a home run and the game-winning, three-run double in an 8-6 championship-game victory over Oak Park. Overcoming a 6-0 deficit was the greatest comeback in state softball tournament history. Named to the Big Ten All-Academic Team in 2007-08, Findlay graduated in with a degree in Psychology in April 2008.