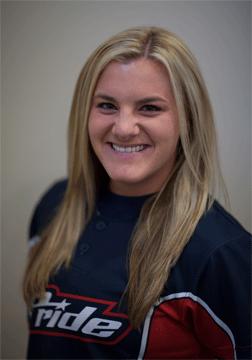 PROFESSIONAL: Galati is entering her 2nd season in the NPF. Galati was drafted to the NY/NY Comets in the 2013 NPF Draft as the 2nd overall pick in the 1st round. In her Rookie season she recorded 6 wins and 11 losses, striking out 39 batters with an ERA of 3.84.

2014 Season: In Galati’s second season, she pitched a total of 29 innings with 12 strikeouts and delivered a 2-0 record. She also finished with a 1.69 ERA for the Pride.

2013 Season: Galati was acquired in February in a trade with the PA Rebellion. The trade added to the Pride’s already deep pitching staff. As a rookie Galati was the workhorse for the NY/NJ Comets. Going 6-11 with a 3.84 ERA, Galati was an at-large selection to the All-NPF team.