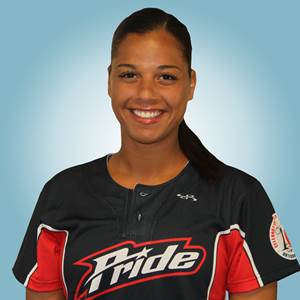 NATIONAL TEAM EXPERIENCE: Played on the US Women’s Futures National Team in 2010… Finished 3rd at the KFC World Cup of Softball…Made appearances at Japan Cup and Canadian Open…Invited to the National Team Training Camp in 2011.

PERSONAL: Born Nikia Jazmine Williams on March 12, 1990 in Mission Viejo, California to Alvin and Denise Williams…Has 2 brother, Brandon and Tony, and 2 sisters, Nicole and Robbie…Graduated from El Toro High School in 2008…Earned 2nd Team All CIF and 1st Team All-League honors as a senior…Named a 1st Team All-CIF and 2nd Team All-State selection as a junior…Named El Toro’s Junior Athlete of the Year…Named to the 1st Team All-County…Won the Orange County Register Player of the Week Award…Helped her high school team to 1st place league finishes in her freshman and junior year…named to the 1st Team All-League in her freshman and junior years…Named El Toro’s Freshman Athlete of the Year (2005)…Missed her entire sophomore year due to an injury…Was a 4 year Associated Student Body(ASB) Officer…Played club ball for the Corona Angels ASA Gold Team, finishing 2nd at the 2008 ASA 18U Gold Nationals, 5th in 2007…Helped the Angels win the Independence Day Tournament in Boulder, Colorado…Currently majoring in individualized studies with a concentration in disabilities at the University of Washington.