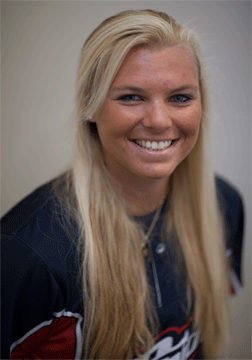 PROFESSIONAL: Sandberg enters her 3rd season in the NPF. Sandberg was selected by the USSSA Pride as the 5th overall pick in the 2nd round of the 2012 NPF Draft. 2012 NPF Miken Rookie of the Year. Sandberg’s career stats include a .297 batting average, 44 runs scored, 13 HR’s, 61 RBI’s and 22 walks.

2013 Season: In her second season with the Pride, Sandberg boasted a .252 batting average while collecting 26 RBIs. With 2 doubles and 5 homeruns, Sandberg posted a .409 slugging percentage. When she was not the designated hitter, Sandberg saw more time behind the plate. In 15 games and 152 chances she committed only 1 error, while throwing out 1 runner attempting to steal.  In the championship game, Sandberg went 3-3 off Monica Abbot of the Chicago Bandits including a double and a homerun to help the Pride win the Cowles Cup.

2012 Season: Sandberg was named the 2012 NPF Miken Rookie of the Year. Sandberg was presented with this award for finishing 4th in the League with a .355 average, 1st in RBI’s with 33, 2nd in On Base Percentage at .504, 2nd in Slugging Percentage at .624 as a rookie for the USSSA Florida Pride. Sandberg also led the league in HBP (Hit by Pitch) with an NPF record (18).

PERSONAL: Born January 21, 1990 to Robert and Susan Sandberg. Has a younger brother named Ryan. Played travel ball for the Virginia Shamrocks. Graduated from the University of Georgia in 2012 where she majored in Health and Physical Education.