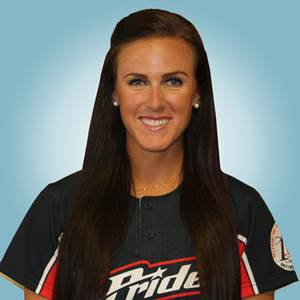 PROFESSIONAL: Drafted with the 1st pick in the 2nd round to the Florida Pride as a result of a trade with the Diamonds. 2011: Joined the Florida for her 1st NPF Season…Had a .205 batting average in 39 at-bats…Had 3 RBI…Had a .205 slugging percentage…Had a .200 on-base percentage.

PERSONAL: Graduated from Santiago High School in Corona, California in 2007 … Won the Mountain View League in 2004 with her High School Team … Won the California Interscholastic Federation Division II Southern Section Championship in 2004 … Earned 1st Team All-Mountain View League and 1st Team All-Riverside County honors in 2004 and 2005 … Maintained a 4.0 GPA through high school … Played travel ball for the Anaheim OC Batbusters, coached by Tyronne Davis, and the California Raiders, coached by Raleen Bruder … Won the 2004 ASA 14-Under Class and a National Championship in 2004 with the Raiders.