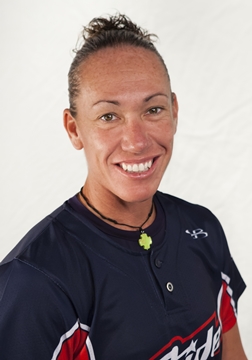 2016 Season: Kelly Kretschman had her best professional year yet finishing the 2016 season as the first Triple Crown Winner in NPF history leading the league in HR (13), RBI (45) and AVG. (.466) to earn the prestigious title. Kelly was named 2016 NPF Player of the Year to earn back-to-back titles as league MVP (2015 & 2016) and earned her spot on the All-NPF team (RF) for the fifth time in her career. Kretschman also earned the title of 2016 Offensive Player of the Year & Home Run Champion and earned league-leading marks in runs scored (44), total bases (111) and only second in hits (63) and walks in 52 games to close out her 11th season.

2015 Season: Named NPF Player of the Year for the first time in her seasoned career and made the All-NPF team for the fourth time. Kretschman enjoyed her best professional season hitting .338 with 7 home runs, 22 RBIs, and swiping a perfect 10-10 stolen bases. She ranked in the top five for eight offensive categories including 2nd in stolen bases, total bases, and sac flies, 3rd in total hits, 4th  in batting average, slugging percentage, and runs scored, and tied for 5th in home runs. Kretschman started 46 of 48 games and was the Pride’s most consistent offensive threat throughout the season.

2014 Season: Kretschman finished the season with 30 hits, 20 RBI and 11 runs scored. She batted a .265 average and achieved a .344 on-base percentage. She also continued her streak of posting a 1.000 fielding percentage.

PERSONAL: Born on August 26, 1979 to Ken and Susan Kretschman in Indian Harbour Beach, FL. Has a half-brother and 2 half-sisters. Joined the Texas State University softball program as assistant coach in 2015.