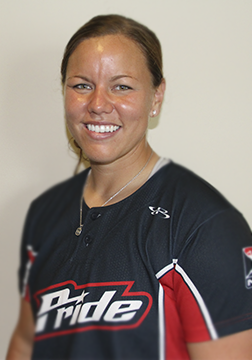 PROFESSIONAL: Ricketts enters her 5th season in the NPF. Ricketts was selected 4th overall out of Oklahoma by the USSSA Pride in the 2013 NPF College Draft. The USA softball collegiate player of the year led the Sooners to the Women’s College World Series Championship in 2013 and was a member of team USA for two summers.

2015 Season: Keilani started 12 games and completed her third season with an overall record of 7 wins and 5 losses with a 2.27 ERA. In 74 innings pitched Keilani struck out 83 batters and kept her opponents to a .218 batting average.

2013 Season: Joined the Pride roster in August of 2013. Finished the regular season 2-2 striking out 30 hitters in 25.1 innings. Posted a .267 batting average. Finished 1-1 after earning the win in the championship game, throwing 8 strikeouts in 4.2 innings during the Pride’s Championship run.

PERSONAL: Born Keilani Ricketts on September 1, 1991 to Jeff and Carol Ricketts in San Jose, CA. Has three siblings; Samantha (2016 Pride Assistant Coach), Richard (a member of the Air Force Academy football team) and Stephanie (a former softball player at the University of Hawaii). Majored in Communications at Oklahoma.