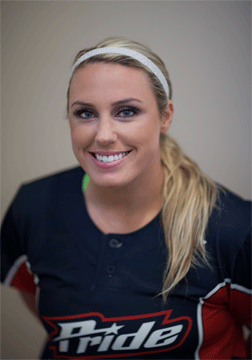 2010 Season: Helped the Pride capture its Championship Title in her rookie season. Pitched 33 innings, Had 3 wins and 1 loss, Had an ERA of 2.76. Had 18 strikeouts in the Championship Series, tying Cat Osterman for the most of any pitcher in the series.

COLLEGE: Graduated from the University of Washington in 2010. 2009 National Champion, 2009 & 2010 NCAA Player of the Year, 2009 USA Softball Collegiate Player of the Year, 2009 & 2010 Honda Award winner, Nominated for an ESPY, 2009 WCWS Most Outstanding Player. Held the University of Washington career record in wins, strikeouts, shutouts, appearances, starts, complete games and innings and holds single-season records in wins, shutouts, strikeouts, starts, complete games and innings at the time of her graduation… Had 2nd most career strikeouts in Pac-10 history and 6th most career strikeouts in NCAA history, broke the Pac-10 records for most Player of the Week honors in a career and season, had the 4th most career strikeouts in NCAA history with 1,860, Had the 8th highest strikeout ratio in NCAA history with 10.9 strikeouts per 7-innings-pitched, Was the Washington Huskies’ 1st Canadian player.

PERSONAL: Born Danielle Elaine Lawrie on April 11, 1987 in Burnaby, British Columbia to Cheryl and Russ Lawrie, has one brother, Brett, who was a member of the Canadian Junior National Baseball Team and now plays for the Toronto Blue Jays. Lawrie is married to Andrew Locke (June 29, 2013). Lawrie has a daughter, Madison Nicole Locke, born on December 16, 2013.