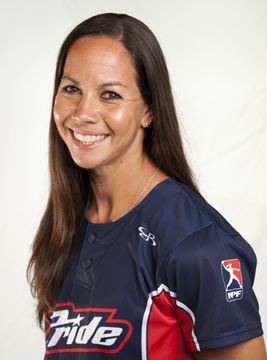 2013 Season: Named the 2013 NPF Pitcher of the Year after taking home NPF Championship Series MVP honors. The First Team All NPF pitcher led the Pride with a 17-4 record, posting a 1.05 ERA stricking out 234 hitters. In the NPF Championships, she finished with a 2-0 record and got the save in the championship game, posting a 0.00 ERA.

2011 Season: Broke the team strikeout record and led the league with 156 strikeouts.  Also led the league in wins, achieving a 14-2 regular season record and completing the 2nd most games in the league. Finished 2nd in the NPF with a .93 ERA behind Monica Abbott at .80. Won 10 consecutive starts through the end of the season pitching for 6 shutouts.

COLLEGE: Graduated from the University of Texas in 2006 where she led the Longhorns to 3 Women’s College World Series wins.  Was a 4-time NFCA All-American, 3-time Big 12 Female Athlete of the Year, and 4-time Big 12 Conference Pitcher of the Year. Was the first Big 12 student-athlete to earn 4 Player of the Year Awards, named an All-Big 12 Academic Team member for 3 years, 3-time USA Softball National Player of the Year (2003, 2006, 2007), set the NCAA career strikeout record and strikeout ratio record, ranked second all-time in career shutouts with 85, 2-time ESPY winner for Best College Female Athlete, and is a Honda Award winner.

PERSONAL: Born Catherine Leigh Osterman on April 16, 1983 to Gary and Laura Osterman.  Has 2 younger brothers, Craig and Chris.  Graduated from Cypress Springs (Texas) High School as the Gatorade National Softball Player of the Year. Majored in Psychology at the University of Texas.  Received a Master’s Degree in Positive Coaching from the University of Missouri in May 2015. She is currently an assistant coach at Texas State University.