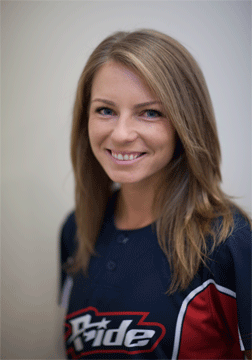 2014 Season: In her final season with the Pride, Lowe batted .364 with 52 hits, 15 RBI with 28 runs scored and 6 stolen bases and an on base percentage of .392. Her excellence on the field exceeded past the numbers to our fans who idolize Lowe with her team camaraderie and is the source of inspiration to many young girls out there. This season also marks her retirement from the NPF and six years with the Pride. We wish her all the best.

2013 Season: Lowe saw action in all 48 games of the Pride’s season.  The center fielder remained steady by not committing an error in 47 chances.  Lowe was selected to the All-NPF team after batting .351 on the season with 59 hits and 23 RBIs.  The speedster swiped 16 stolen bases and posted a .408 on base percentage.

2012 Season: Caitlin Lowe was named the Mizuno player of the Year in the 2012 NPF season for her outstanding play both in the field and batting. Lowe led the league in hitting with a .440 average and also finished first in the league with 51 hits including 6 doubles. Lowe finished the year with a .496 on-base percentage, a .509 slugging percentage and finished in the top 5 of 6 different offensive categories. Lowe also led the Pride with 12 stolen bases.

PERSONAL: Born Caitlin Faith Lowe on February 6, 1985 to parents Dave and Dawn Lowe, who currently reside in Southern California. Graduated with a degree in psychology. Is the 2nd oldest of 5 children: Whitney, Paige, McKenna and Tanner. Her 2 younger sisters, Paige and McKenna, both played softball at Oregon State University.