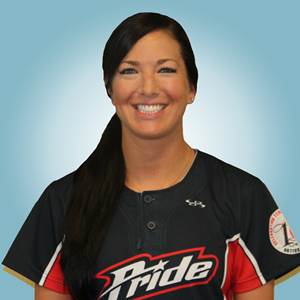 2012 SEASON: Ashley Charters batted .299 in 117 AB while hitting 4 HR and batting in 27 runs. The 27 RBI were good for 2nd on the team while being 5th in runs scored. Charters at seasons end was nominated to the NPF Combat All NPF Team.

PROFESSIONAL: 2011: Began her NPF career with the Pride…Had a regular season batting average that was 3rd best in the league at .354…Tied for 6th in the league with 5 homeruns along with her teammate, Charlotte Morgan…Had a 4th best in the league RBI at 26…Was 2nd on the team with strikeouts at 21…Tied for the team lead in walks with 16, placing her 3rd overall in walks for the NPF…Had a .442 on-base percentage.

COLLEGE: Graduated from the University of Washington in 2009…Won a National Championship title (2009)…Named a 3-time All-American….Named a 1st All-Pacific Region and First-Team All-Pac 10 honoree… Named to the Women’s College World Series All-Tournament Team…Named a Member of the WCWS All-Tournament Team 2 times (2009 and 2007)… Named the Team’s Offensive Most Valuable Player… Named an NSCA Strength and Conditioning All-American… Recognized as one of 25 finalists for USA Softball Collegiate Player of the Year… Named a candidate for the Lowe’s Senior CLASS Award… Named a Pac 10 player of the week 2 times…Set the University of Washington record for stolen bases at 133…Tied for the record in triples with 16…Had 2nd most runs in university history with 215…Had 2nd most hits in university history with 315…Had 3rd best average in university history at .396…Had the 5th best on-base percentage in university history at .464…Had 6th most walks with 92…Had 7th most at-bats with 795…Had 7th best slugging percentage at .542.  SENIOR:  Had a .447 batting average…Had 65 runs…Hit 9 homeruns…Had 33 RBI…Had a .647 slugging percentage…Had a .508 on-base percentage…Stole 37 bases.  JUNIOR: Had a .391 batting average in 202 at-bats…Had 59 runs…Stole 36 bases. SOPHOMORE:  Had a .368 batting average…Stole 27 bases…Started in all 59 games…Had 27 multi-hit games.  FRESHMAN: Had a .374 batting average…Had 53 runs…Started all 57 games…Had 18 multi-hit games…Stole 33 bases.

PERSONAL: Born on March 13, 1986 in Nampa, Idaho to father Wilbur and mother Tanda Charters…Has two brothers, Kaleb and Seth, and 2 nieces, Reece and Raleigh…Graduated from Southridge High School in Beaverton, Oregon in 2004…Was named Oregon’s Co-Softball Player of the Year 2 times….Played varsity basketball for all 4 years of high school…Named a McDonald’s All-American basketball player in 2004…Majored in sociology and minored in education, learning, and society at the University of Washington.