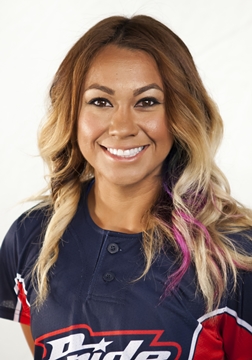 PROFESSIONAL: Kamekona is entering her 5th season in the NPF. Kamekona started her NPF career with the Carolina Diamonds in 2012. Kamekona then moved on to play with the NY/NJ Comets in 2013. Her career stats include 92 hits, 18 home-runs and 58 RBI.

2014 Season: This season marked her first year with the USSSA Pride. Kamekona ended her third season in the NPF with 22 hits, 26 RBI and 13 runs scored for the Pride. She batted a .247 average, had 7 stolen bases and achieved an on-base percentage of .289.