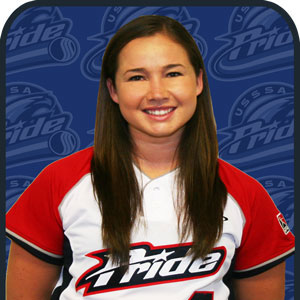 Professional: Haber was a great asset to the outfield for the pride and brought her speed and versatility. In Alissa’s first season in the NPF, she played in 18 games and recorded 7 hits in 49 at-bats which came out to a quiet .143 average. During the championship series Haber blasted her first home run of the season against the Chicago Bandits en route to her first and the Pride’s first NPF Championship.

National Team Experience: A member of the U.S. National Team, Haber helped lead Team USA to the 2009 Canada Cup Championship and captured the gold medal with Team USA at the KFC World Cup of Softball in Oklahoma City. In addition to her game winning hit in the championship game, she provided critical home runs against Japan and Australia and was a part of the USA Softball Team that captured gold at the 2009 Japan Cup in Sendai City, Japan. In 2010, Haber was nominated for the Lowe’s Senior CLASS Award and was recognizes as a top-tem finalist in the competition.

College: On the field, Haber is a three-time All-American and All-Pac10 selection. Haber entered her senior season with a .395 career batting average, a clip which stands only behind that of two time Olympian Jessica Mendoza in the Cardinal record books. In 2010, Haber led the Cardinals, hitting .448 with 64 hits, including 13 doubles, two triples, five home runs, and 29 RBI.

Personal: Alissa is the daughter of Dave and Beth Haber and she has two brothers, Samuel and Chris. Her father was a national champion in the high jump for Cal State East Bay. Attending Stanford she majored in English. Alissas hobbies include reading, napping and reality TV and her full name is Mary Alissa Haber.